What Racquetball Teaches Me About Creativity 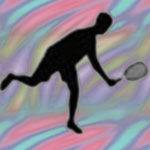 This post was inspired by watching a number of my students sink after what they considered a less-than-stellar session of writing. It is dedicated to them and to anyone who makes things: art, stories, pie. It is a note to the part of ourselves that gets frustrated when we don’t create something we like – when we wonder what the hell we were thinking when we picked up that pen or that paintbrush or that pastry dough.

This is my take on the creative process, and what it means to humble ourselves to where we are and not judge, because judging is not an accurate or interesting measure of much, except this moment and then the next moment – which is kind of like reporting the weather – which, as we know, is always changing.

So much of what I know about this I learned (and continue to learn) on the racquetball court. Here, there are plenty of moments – some excellent and others totally doggy – that could paint a picture about my success or failure as a player. But if I were to hold on to every good and bad shot I make in a game, and judge what kind of player I am based on each shot, I’d be a mess on the court. I would never make it to 15 points.

It’s easy to feel great when you’re playing well or writing well, but when you’re not, that’s where the rubber meets the road and you are challenged to practice getting comfortable with discomfort. And it’s odd, but my favorite part of the game lately has been when I’m way behind. I could easily sink into “This sucks” – just like my writing students sometimes feel. But what I’ve been practicing instead is relaxing myself; taking a deep breath, planting my feet on the ground and getting present – not thinking about the future – my win or my loss. As cliché as it sounds, “It ain’t over ‘til it’s over” rings true. It means even if I’m two points from losing, the game could change in an instant and I could come back. So I’ve found a place to hold myself where I can tolerate being wherever I am – in the middle of the game, or two points from winning or losing. 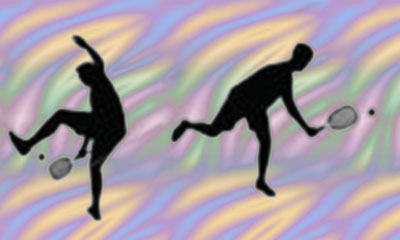 When I used to play in racquetball tournaments – which were so tense for me – every time I served the ball I’d tell myself, “I love this game,” because no matter the outcome, I did love the game. In fact, loving the game was bigger than the game itself and no one could take that love away from me – even if they took all 15 points. Which didn’t mean it was fun to lose – because it wasn’t – but I knew I would come back later and play again, that my love of the game would bring me back.

I’ve learned to align myself with something bigger than winning a racquetball game, or having a perfectly satisfying session of writing. These are just moments in the scheme of a larger relationship, which is the privilege of being in the creative flow – on the racquetball court, on the page, or in the middle of my life.

What I’m suggesting is that we put the kibosh on wondering whether we’re good writers or good artists, and do something really courageous, which is to let go of that line of questioning and instead keep ourselves in a neutral, non-judging place – a place that allows us to keep working or keep playing. The pieces we write, the games we play – they don’t matter so much. The important thing is to stay in the game so that it continues to unfold for us, brilliant line after doggy line, then another brilliant line.  Doggy, brilliant, doggy, brilliant. You get the idea.

So this is an open invitation to my creative friends to join me in getting comfortable with being uncomfortable – with our work, our missed shots, and all the other imperfect moments in our lives. They will keep coming – ball after ball – unkind thought after unkind thought. But if you’re a creative person who makes things, the trick is to find a place to work beyond of all of that. I’ll meet you there.