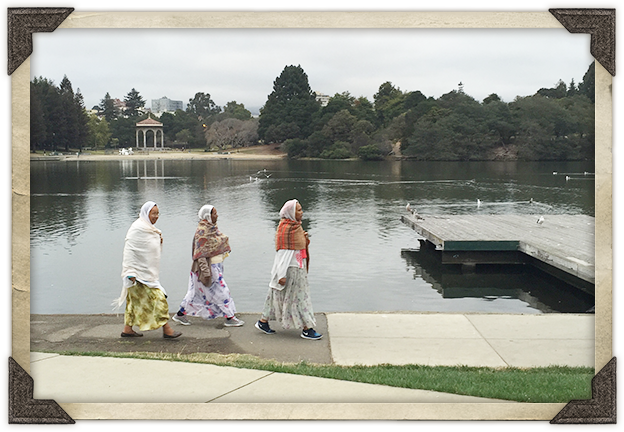 “Are you bringing yours?” Steph asked as we set out for our weekly hike around Alameda. “God no,” I said, “I need a break – I’m like a freak.”

So we would be champions then. We would muster the strength to simply be together instead of keeping one hopeful ear cocked for the sound of a beep, a buzz, a tweet, even a cricket – some indication that we weren’t alone, that we were part of whatever was going on out there in the world, and ultimately, of course, that we were loved.

Seriously, we could do this; we could take a break from our phones for one hour, 45 minutes and 27 seconds.

“But what if we need the voice recorder?” I said, “in case we say something brilliant?” It was true, these 7-milers around the island not only resulted in cheap therapy, but were the foundation for great blog posts and project ideas as well.

“We’ll just have to remember what we said, just like in the olden days,” Steph winked. Brutal, I thought. We could hardly remember our names sometimes, but we could try, we could go old school with this one.

The truth was, my world had gotten very small over the last couple of years. Smart phone small.

I don’t know how it happened. After my children left and my marriage ended, I probably spent more time by myself, but my big, lusty relationship with the phone sort of snuck up on me. One day I was just an ordinary user who made phone calls, checked emails, kicked off a few texts. Then suddenly overnight I became one of those people whose phone was stationed on the table at dinner, who checked email when their dinner mate got up to pee, the person who got lost in their phone while standing in line at the bank, at the market, riding in an elevator, or even when crossing a busy street, cars whipping all around me. If there is one moment of down time, my hand is digging into my purse like I’ve lost my pulse. It’s by my bed at night, the thing I’d grab if there were a fire. Anytime it beeps or chirps I startle and reach for it. It’s as if I come alive again.

Can anyone relate to this?

There is too much sexy stuff in the little box. The camera apps keep me totally entertained – I think I have 18 of them. Then there’s Instagram and Facebook, not to mention the Voice Recorder – which I use to capture ideas – Yahoo News Digest, Google Maps, Paypal, Epicurious – in case I need a recipe on the run – Safari, Bandsintown – to let me know which bands are coming – Nextdoor – the app that let’s my Alameda neighbors know about our house concert this weekend, Flixster so I can see what time a film is playing, and let’s not forget Tinder, the dating app – but don’t get me started on that one. Let’s just say that as far fetched as this sounds, my very own phone could introduce me to the next love of my life, though at the very least it’ll certainly remind me to meditate, or to have the photo I took three minutes ago printed and ready for pick-up at Walgreens in 10 minutes. Seriously. You can do that now. I did it last week.

Not the kind of lonely like I wish someone would call. I’m not lacking for friends or things to do. It’s a kind of lonely that has me feeling a little lost and spacy when I have down time, like I forgot how to use my hands – the hands that used to make things in my free time; whole nights spent at the art table or playing guitar, or reading a book. Lonely and lost like I don’t know how to sit still or be quiet, like unless something is happening, I feel bored, like the party is happening in my phone and checking it every five minutes could change my mood or my life because someone might want to join a class, or they liked my Instagram shot, or my FB posting, or maybe I got a text from the nice man or someone else who is thinking of me and sending love. Lonely like I got locked outside of my own house and can’t seem to find the way back in. Lonely like my phone is some kind of crystal ball and I’m waiting for it to tell me something, only I forgot what I needed to know.

Apparently we can blame it on dopamine.

Check this out from Psychology Today:

“With the internet, twitter, and texting you now have almost instant gratification of your desire to seek. Want to talk to someone right away? Send a text and they respond in a few seconds. Want to look up some information? Just type your request into Google. Want to see what your colleagues are up to? Go to Linked In. It’s easy to get in a dopamine induced loop. Dopamine starts you seeking, then you get rewarded for the seeking which makes you seek more. It becomes harder and harder to stop looking at email, stop texting, or stop checking your cell phone to see if you have a message or a new text.”

So it’s not just a weakness on my part, it’s in the water. It’s a condition and I’m not alone in this.

“You ready?” Steph says as we head out on our walk. “I think we’ll be fine without our phones, don’t you?”