Spooning with my Mother 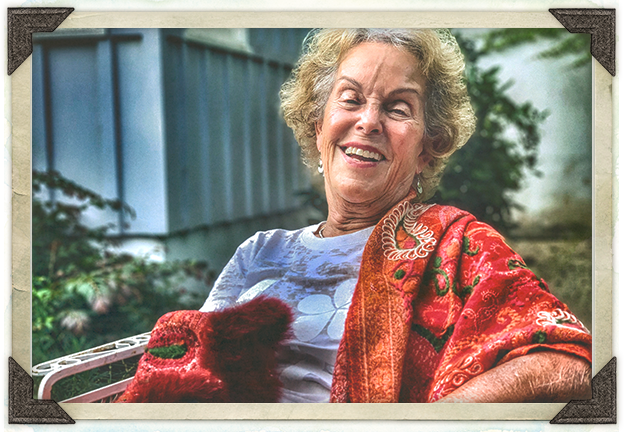 Well, I finally got the courage to ask my 83-year-old Mother if she wanted to spoon with me in bed.  I’d been wanting to ask her to cuddle for days, ever since my daughter and I arrived at her house earlier in the week.

My Mother’s house is small, perfect for one, with a little bedroom and an office. It’s bright and sunny with windows which look out into the garden. I was supposed to be sharing the fold out couch in the office with my 25-year-old, but it proved too tiny for two grown ladies. So after a few nights of tossing and turning, I headed over to Mom’s bed down the hall, which she shares with her two little dogs, Jack and Jackie. To this day I do not know which is which, but my Mother speaks to them as if they are her children. “You’re as close to human as possible,” she whispered to the fluffy white one just two minutes ago as I sat here writing, “but better,” she cooed.

The first night I gingerly peeled the covers back on the far side of Mom’s queen-sized bed so I could slip in unobtrusively – almost like I was never there. My plan was to sleep and rise without messing up the sheets. Partly because I felt like I was intruding, but also something deeper, and which would take me a few days to understand.

We’d come to L.A. to help her with some house projects, and to give her company during the pandemic, which she’d weathered alone with the dogs. We’d work in the garage, which was still filled with boxes from her move into the house nine months earlier. She’d actually lived across the street from the little house, in a home she and my Dad moved into when she was 22-years-old, a few months before I was born. That was 60 years ago, and she’d lived on this street the whole time. Mom and Dad raised four kids in that house, buried dozens of pets in the yard – everything from cats, hamsters and mice, to beloved dogs with names like Ralph, Bow Wow and Daphne. My parents were social, had party after party, and belonged to the same temple for 60 years. My Mom’s three best friends to this day are women she’s known since grade school in Los Angeles. Dad died 11 years ago and Mom stayed, but the old house needed too much work, so she sold it and lucky for her, got to move across the street.

After a few days here, I found myself impatient with Mom. One night her car was broken into on the street while we slept, and her social security card was taken, which took us a day to untangle. The tasks around the house that I’d come home to help her with seemed to take both of us longer. The boxes in the garage were filled with ancient paperwork that mattered a long time ago, and which might matter again, but which confounded us. When her phone rang she’d answer it, and have thoughtful conversations with people trying to sell her insurance or new windows. I got bossy and short.

The pandemic hasn’t been easy on any of us, and it has taken its toll on Mom too. Her hands were shaky, and her arms and legs looked more bruised than usual. While she was her peppy self in some ways – shouting Alexa! Show tunes! she seemed vulnerable to me – leaving doors open at night as she tottered around the house talking to her dogs. The world was changing around us and she seemed almost unaware. I kept imagining what it was like to live on the same street since you were 22-years-old – a baby really – and how easy it would be to associate that place with love and safety forever.

Underneath my impatience with her was worry.

I wasn’t exactly my old self either. Between the pandemic and politics – don’t get me started – I had become increasingly agitated. I’m usually an up and up kind of woman, but I became that person in conversations who’d start down a dark path and keep going. Friends watched me in silence as I went on about people who don’t wear masks, or what was happening in Washington, bursting into tears after about two minutes. It’s not that my friends didn’t agree with me, but sometimes I wondered whether I was bringing them down. Many of them gushed about how great it was to have so much extra time to exercise since they weren’t commuting. I kept trying to find the bright side, but I couldn’t get there.

What I needed wasn’t more exercise. I needed something more instinctive, something primal. I needed touch.

That’s when I started thinking about spooning with my Mom. Maybe she needed it too. Her partner, Ralph had died two years ago, and I hadn’t slept alongside anyone since February when my own partner and I had last seen one another.

While it felt courteous of me not to take over Mom’s bed, the actual space in the bed unoccupied between us felt too intimate, like we were afraid to cross it. As much as I longed to pull my body into the crook of my Mother’s body and lay there breathing together, I was too shy to ask her to do that with me. I thought about it all the time though.

The days ticked on and there were only three days left before Ruby and I would head home. I was aware that as each day passed I had lost another chance to spoon with my Mother.

One early morning I got brave, turning to her in bed and said, “Mom, would you like to spoon?”

She looked at me sweetly with sleepy eyes, cocked her head and said “okay.” Then she tucked her back into my chest and I wrapped my arm around her waist. She began giggling like a 5-year-old. Then she got quiet and said she felt sad. “I know,” I said.

We lay there in silence, and after a few minutes we both fell asleep.

When we woke up I made coffee and set off for a walk. All day she was happy, talkative, almost giddy, like a plant that had finally been watered.

As for me, I got quiet. I became self conscious and a little afraid. Would my Mother want more from me? And how would I navigate that tender space? This was an old feeling and not just tethered to my relationship with my Mother, but to all my relationships, especially with men. It was easier to stay on my side of the so called bed – to slip in and slip out before things got messy. I could connect with people, but on my own terms.

Still, I had promised Mom that we would spoon as long as I was home, and the truth was, I wanted to try it again, even if it wasn’t entirely comfortable for me.

The next morning she made a move to get out of bed and I said how about just five minutes of spooning?

I think about other mothers who have shared beds with grown daughters in difficult times. Fathers and sons, sisters and brothers, whole families sharing beds, holding onto one another, keeping each other safe when the world felt dangerous.

That’s what this need of mine felt like, awkward as it was, as cautious of intimacy as I am. I wanted to lay down with another person. I just didn’t realize it would be my Mother, my arms gently wrapped around her as we lay together in this strange new world.

Join us now for the Wild Writing Family

Friends, if you’re looking for a way to stay connected to your beautiful self during the pandemic, please consider joining our Wild Writing Family, a weekly writing practice that you can do on your own.