Time to Wake up, Sleepy Head 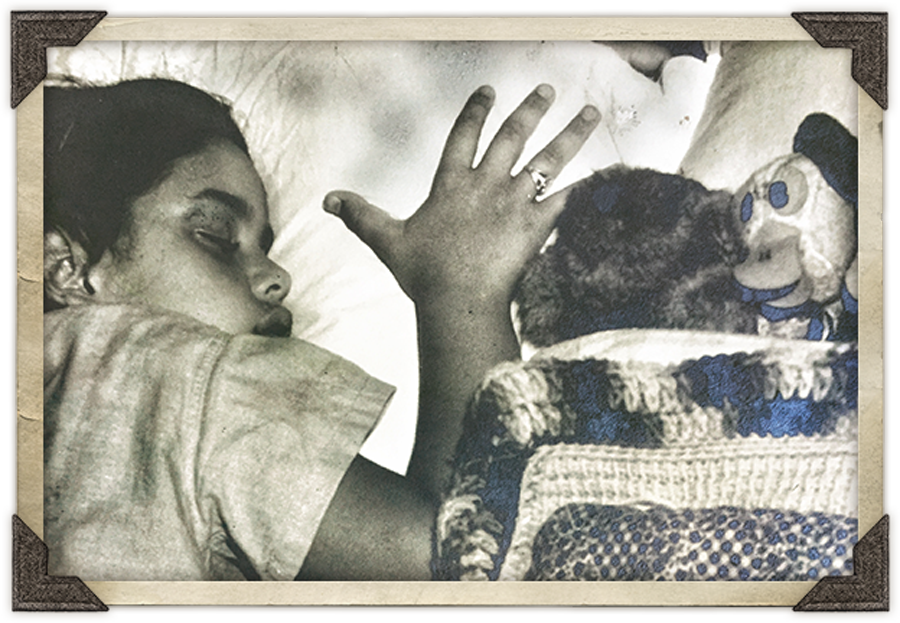 When I was 5-years-old, my grandfather, a photographer, decided that the shot he wanted was me, naked, standing on the diving board of his pool in Los Angeles. He took a lot of pictures of me when I was young  – maybe because I was the first grandchild, the first girl. I got caught in his lens a lot. There are pictures of me naked in a bath tub – in one I’m biting my lip, looking up at him shyly.  I’ve gathered the yellow duckies around me so that I’m covering my private parts – that’s what we called them. I don’t know who else was there, who put me into that tub. It’s an adorable shot, everyone loved it. The naked little girl covering her private parts with the ducks.

I don’t remember how he talked me into the diving board shot. I don’t know how my clothes came off – whether I took them off myself in the little boat house by the pool. I don’t remember how he instructed me – maybe that he had an idea for a picture and he told me what to do.  Maybe he said it was going to be fun. I don’t think my grandmother or my mother were at home. The only people I remember with us in the backyard were my 4-year-old brother and our babysitter, who were hiding in the bushes laughing at me as I awkwardly stood naked on a diving board on that sunny day in L.A.

My grandfather printed those pictures up big, 11 X 17, me standing there, sun in my eyes, a little knock kneed, one finger in my mouth, the other hand covering my genitals, staring at his lens, not smiling. These weren’t secret photos he made for his own use. Everyone saw them, and it’s likely that nothing weird happened. Maybe he took those shots, then let me put my clothes back on and get back to playing with my brother. It was 1965. The blond pigtailed Coppertone girl was getting her pants pulled down by a puppy and showing the world her bare butt. It was cute.

But when I ran into those photos years later, I felt a small alarm for my younger self. I felt protective. I look into my 5-year-old unsmiling eyes wondering what she’s feeling as she stands there naked, before her grandfather.

This isn’t a story about a big violation. This isn’t a story about rape. It’s true that my grandfather would go on, later in my life, to be inappropriate with me – reaching for and squeezing my breasts in front of his secretaries when I was 19 – an act more about humiliation and power than sex. Maybe this moment at 5 was a prelude to what would come. Maybe I could feel a little something not quite right as I stood there naked in front of him.

This is a story about very early feelings, the beginnings of the tiniest knowings that a young girl feels in her belly, a feeling that something isn’t right, but she doesn’t have the words for it, and she loves her grandfather so she shouldn’t feel bad, and so she doesn’t say anything because she must be wrong, and she doesn’t want to upset him or insinuate that he is wrong, and so she stuffs it.

This is a story about stuffing it. About the ways women learn very early to ignore their feelings, to make themselves wrong, to decide they don’t know how they feel when they actually do. This is a story about the toll of years and years of ignoring and turning away from those feelings and how in middle age many of us are still trying to own what we know – not just with men, but with everyone. How good we’ve become, how nice, how appropriate. How even for as intelligent and wise we are in so many aspects of our lives, there is a need for us to reclaim something instinctive and powerful that we turned away from and lost at an early age. And it’s dangerous. What did one man write on Instagram last week? Something like, “I don’t know why women haven’t burned the cities down by now?”

I have struggled for two weeks with this blog post, certain that I cannot begin to describe the depth of this problem, for me, and for other women. Certain that I cannot begin to write about this intelligently and cover everything, all the implications of what happens when we stop trusting ourselves and ignore what we know, and at such an early age. How even now, writing this, I wonder if I’m making a big deal out of nothing?

It’s complex. One of my best friends is a grandfather to two young girls who regularly run around his house naked, who ask him for help getting on a swimsuit and starting a bath. Knowing my friend, I know there is not one ounce of impropriety going on there.

I write with 70 women a week in Wild Writing, and in the last two weeks since this Kavanaugh thing has come up, the writing has been on fire. Woman after woman has told stories of rape and near rape, being pushed down in fields, waking up naked in unfamiliar rooms, and finding themselves in situations where it’s easier to just count the tiles on the ceiling until it’s over,

And as horrible as those stories are, for me, it’s these early stories – not the stories of rape – that I was the most taken by. The stories of being young girls and how early we start feeling unsafe, and unsure of what’s happening. The story we heard about being followed down a street by an older boy who is your “friend,” but who doesn’t walk with you, who trails you for blocks until you have to break out into a run to get home. How you don’t tell your mother because she’ll make it about you, she’ll punish you, giving you a curfew so you can’t go outside. Or the story we heard about the neighbor boy who shoves his tongue into your mouth at 10, and how all summer you avoid him, hiding behind the rose bush when he’s on the street, pretending to water the flowers, keeping an eye on him so you can tally the distance to make sure you’re safe. How tomorrow is church and you’re going to have to come up with something to confess, some sin, something that feels bad in you, something that you’ll have to own as your problem – which is confusing because you haven’t done anything wrong, or have you? Maybe you shouldn’t have been walking alone on the street, maybe you shouldn’t have let that boy get so close.

It makes me wonder about my own two girls and all the times they knew something in their bones that they may have mentioned to me and which I told them not to worry about, all the times I talked them out of what they knew. How even in recent years I have found myself in situations with men where something felt off, where I ignored what I knew to be true, just to get some love or be a good sport. How alcohol helped me to blur the truth. And how it often takes me a day to know how I feel about an interaction I’ve had with anyone – man or woman – especially an interaction where I have been hurt or I want to say “no.” How it can take me two days to know how I feel, and even more days to communicate it. Especially with men. I have a hard time saying no to men.

After my grandfather squeezed my breasts in front of his secretaries – women who had devoted years to him – women who turned away, embarrassed when he did that –  I quit the summer job at his liquor company. The next day my mother hauled me in front of my grandparents so they could tell me what an ungrateful bitch I was.

Honestly, the one good thing to come from this Kavanaugh debacle is that women are waking up to how angry they are. How angry they’ve always been. We’re beginning to remember what it feels like in our bones to know when something is wrong, even if no one around us seems to agree or see it. We’re waking up to our own auto pilots, our own default settings, and the default settings of this country.

It’s probably too much to hope that a 5-year-old can navigate a grandfather with a camera, naked on a diving board, but how can the people around that girl help her to listen to herself, young as she is, to hear the sound of what is true inside of her and to follow that sound, to let that become her north star, something she follows and which becomes stronger and more undeniably ferocious as she grows.

Please join me as we continue to do the work of finding our powerful voices together. It’s a community effort. All voices needed.

Dismantling the Nice Girl is a workshop I’m running over the weekend of October 26-28 with my dear friend, Sonya Lea, in Alameda. We still have seats and we’d love to have you.