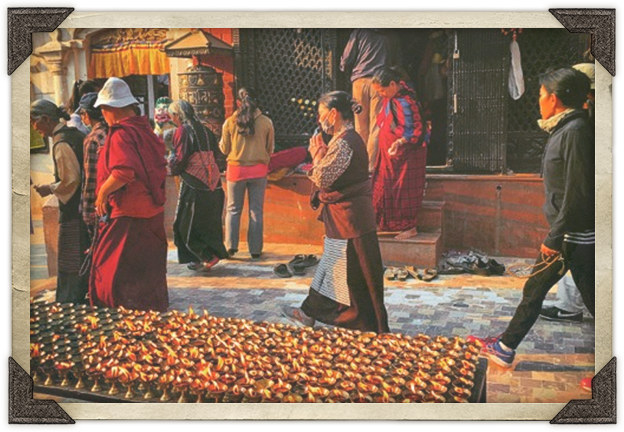 The Nepali merchant tells you that the beautiful turquoise mala beads cost 1,000 rupees. You do the quick math and realize they actually cost $10 – which is the equivalent of two chai lattes in the hip town of Berkeley near where you live.

The first day James, the leader of your group, takes you and your friends into the sea of people circling the stupa – men and women with beautifully lined, ancient faces, some of them falling onto their knees in prostration, others just walking and chanting – cripples, beggars, sadhus, monks in red tennis shoes, and just ordinary Tibetan and Nepali people who start their day with prayer – you wonder if it is okay to be swept into their tide– or whether it is wrong to walk among them without really knowing what you are doing.

The fact is, you never pray – ever – except for when things are really bad – like that one time when your daughter was sick with that mysterious illness that had her in the hospital for a week. You cleared the decks for that one, cancelled everything and got on your knees by her bedside.

If you’re afraid of anything it’s being a faker, a mimic – those people drive you nuts. Like those 20-somethings who teach yoga in trendy, upscale yoga studios in Berkeley, and who greet you at the door with their sparkling, vacant eyes and their Namastes – girls who sit in lotus position thinking about that great pair of yoga pants they saw at Athleta, and how sexy it’ll make their asses look.

Be honest, you’re not so different from them. You want enlightenment, you want to feel more free, but most of the time you’re thinking about your next cup of coffee or how you’ll lose those last 5lbs before summer, or whether that guy you’re dating will like your photo on FB.

You’re a good person – you care about people.Your students tell you that the work you do has changed their lives. You’re not totally shallow, it’s just that you often feel like you’re the center of your own world. Like the buck starts and stops with you. The only higher power you ever knew were your mom and dad – they were the gods you had to bow down to. So how can you pray with feeling when you don’t really believe there’s anything else bigger than you out there?

Paul, the official photographer of the group, tells you on a hike to “fake it till you make it.” He says that even if you’re just mouthing the words – Om mani padme hung – as you finger your beads — it’ll start a positive energy that you can fall into and which might eventually turn into something you can actually feel. And you think about that. You wonder if you’re someone who can chant ancient scripture and have it really mean something to you. I mean, it’s a lot just to say Namaste to people; do you really see the God in them?

Sometimes you wonder if the people who are the most devout are actually the most troubled, that they pray hard because they suffer hard. Your suffering is pretty typical stuff. You hope you’re not still trying to lose 5 lbs when you’re 70, and it would be swell to fall in love, but something about circling the stupa at Boudha and praying for love feels cheap. Other people are praying for the health and well being of all sentient beings – but that feels abstract to you. You can’t wrap your head around it.

You’ve been told you’ve got to haggle the price for everything in Nepal or the vendors won’t respect you, but it doesn’t come easy. You don’t want to steal from folks. And let’s face it, your life is Trump Towers compared to the lives of these people. There is no joy in haggling with this kind, dark-skinned man selling the turquoise beads, and whose life was dismantled when the earthquake hit last year. These are beautiful beads meant for prayer that he’s laid out on the white cloth in the patch of dirt, and now you’re expected to talk him down from the price he’s asking.

On the last day of your journey, in Nagarkot, a Tibetan woman has come up to The Farm House where you’re staying, and has arranged prayer beads and other items in a nice row on the ground. She has a pretty smile and knits while she waits for customers. You haven’t got very much money left, but you really want those turquoise mala beads for yourself and for friends back home. You think about how you’re going to bargain her down, but in the end you don’t have the heart for it.

When you pay her the full price she cocks her head a little, and smiles. You’re a terrible bargainer, the mala beads are going to end up on your wrist, you’re probably never going to learn the prayer that Paul taught you, but your heart is good and you just put a little more money in that woman’s pocket. If there is a goddess, she can’t be too disappointed with you. There are millions of sentient beings out there, why not just start with one of them?