What I Came For 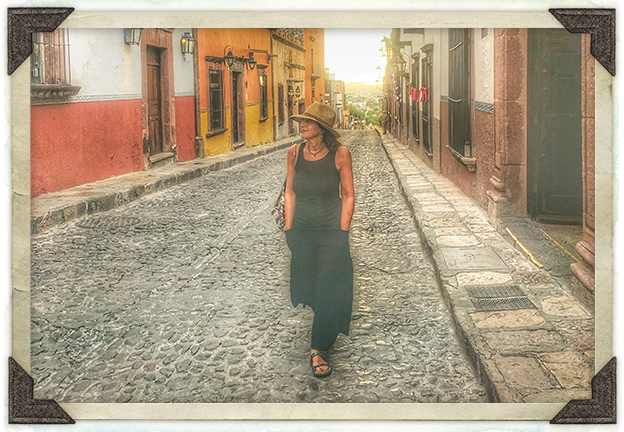 It was like this, you were in Mexico, and the moment you got there you wondered why you’d come. You tried to remember the plans you’d made months ago, why you thought five weeks south of the border was a good idea.

Your story was this: you liked San Miguel, a big city that felt like a small town. You liked stepping out of your rented house on Animas St., how you literally fell into the flow of people heading into the day; the rag-tag group of kids with backpacks, mothers strolling babies, the bakery owner pushing open her doors, a man throwing a bucket of water onto the cobblestones.

You liked cobblestones, how they huddled together like thousands of baby hippos, the short walk to the town square that took you past the school where Mexican teenagers in uniforms and pink hair lounged alongside grandmothers on benches. The churro man would be there, sitting in front of his pyramid of sweets. He’d be asleep in front of the pile by noon. And the balloon lady, she’d be there too, minding her toddlers, as she tied strings to balloons so they didn’t fly away.

You knew that Pamela’s house would be perfect with its shady living room – a respite from the 93-degree heat – the big wall of bougainvillea in the courtyard that you could stare at from the couch. On the roof was a stand-alone bathtub where you imagined yourself floating in warm water, watching hot air balloons rise from the hills.

You’d tuck into yourself a little more, get a little quieter.

“This time you’ll fall in love,” your friends said.

You remembered the scent of hot tortillas that hit your nose as you turned the corner toward the market, the mysterious hours of the cafe down the street, and how sweet their cornbread was. And how, because of the unpredictable hours, you bought a slice every time you saw their doors were open.

These are the things you’d remembered, that had called you back.

And those cobblestones that had worn a hole in your boots last winter, they’d bitten the strap of your Birkenstocks off last week. Your new story included that and the tall bottle of mezcal that sat on your kitchen counter for weeks untouched. How every time you asked a grocer for a lemon, they handed you a lime, and the fancy half and half you walked a mile for. How when you don’t drive, you only buy what you can carry and how that makes everything so simple. You have what you have. Period.

And which had become a bit of a lesson for everything.

So your story was wandering into town on your 62nd birthday with only the smallest sense of destination;  lunch, a stop at the bank, maybe find a cobbler to fix your broken sandal. It was the easiness of the day, the way your body moved through space, the strength of your legs, and the celebration of that – that your parts were working – something you don’t think about when you’re young, but then as you age it becomes more clear that simply the ability to move without pain needs to be acknowledged. And something else too, which is harder to describe, but has to do with being alone in a foreign country on your birthday, and feeling peaceful with your place in the world, as it is, alone, feet on cobblestones.

And that one night, Barb, the owner of the old bordello that she’d turned into a hotel, had finished her Mexican taxes and suggested celebrating with a bottle of wine, just when you’d decided that you were taking a break from the stuff, but what the hell. And how nearly two hours passed, the two of you hiding from the heat in her office, talking about your lives; all the shenanigans you’d been through; the marriages, the children, the loves – everything that seemed like a good idea at the time. “Salud!” we kept saying, as we clinked our glasses. And how later, you and Barb – and her helper, also named Barb – climbed the rickety stairs to the roof of the hotel in the dark with cups of ice cream in your hands. The ladies showed you the secret of angling the deck chairs just right so you could see the bright lights of the church a few blocks away.

You and these women you’d come to know over the years, older than you, smart cookies. No boyfriends among you, the hot day cooling around your feet, a small dish of vanilla ice cream you’d all decided to call dinner.

Your story was this, by day you wandered, mostly alone, you turned 62, you forgot why you’d come to Mexico, you gave the bottle of mezcal to a friend named Lobo, you didn’t fall in love, the cornbread was delicious, the crickets put on a nightly concert, you didn’t hear the roosters, but there was ice cream on the roof of an old whorehouse, three women watching the glow of the church in the moonlight – best seats in the house – like it was a rock show.

Maybe you’d come for that.

Inspired by a line from the Jane Hirshfield poem, It Was Like This: You Were Happy

Listen to Laurie read this piece …