Lost in a Sea of Humanity 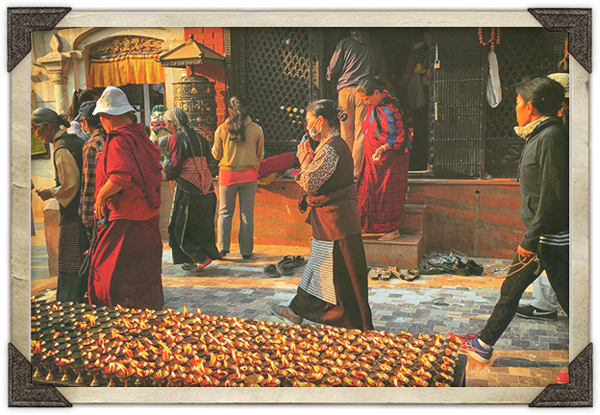 A few years ago I found myself running alone down a trail in the Himalayas, Nine Inch Nails playing on my headphones, rain lightly falling around me. I’d left my friend Sunny and our Sherpa, Raja, on the trail behind me. We’d been hiking for five days on a route that took us to a town called Namche Bazaar – which is on the way to the Everest Base Camp. Curiously, the landscape smelled and looked a lot like the Sierras back home in California; the dirt under our feet was rust colored, the trees smelled like pine, and there was a fast flowing, white water river a thousand feet below the trail. My arms were stretched out like wings as I flew down that trail in the rain – just because I could – just because I was completely happy, and because I’d come to love the freedom of being on my own so far from home.

Travel has been an incredible surprise to me in the last bunch of years. Almost immediately after the kids and Mark left, I started getting invitations to go places – but really far flung places like Nepal and Bali – which is funny because up until then I’d been a complete home body – didn’t travel – loved nothing more than making a nest on the couch all weekend surrounded by paper and books. If you asked me where I dreamed of going, I had no idea. And then overnight I’m running the streets of Ubud, in Bali, at sunrise – running through early morning markets where I’m the only Westerner – dodging goats and motorcycles, children in school uniforms and brown skinned women with baskets of bananas on their hips.

It was thrilling, mind exploding.

At home I was the central character in my own small story – but out in the streets of Nepal or Bali or Mexico, that story disappeared and I found myself being pulled into the aliveness of the world around me; getting caught in a shuffle of red cloaked monks heading for temple, nearly getting run over by a family of four zipping along on a motor scooter, crossing paths with monkeys and cows, joining the 6am tide of people circling the great stupa in Boudhanath for walking meditation, and that great hum I’ll never forget, the sound of hundreds of people chanting as they circle the stupa, many fingering mala beads, some dragging their bodies along the path, in prostration. The trip to Nepal is worth it for that experience alone. Nothing like it.

Leaving home found me in a concrete hut belonging to a tribe of Indians – the untouchables – the lowest caste in Kathmandu – sitting on quilts on the ground watching the women of the tribe bring my friend James small sacks of money that they’d begged on the streets – money from tourists from all over the world – that James will change into rupees. The next day we did Wild Writing with one of those Indian girls, and we listened as she read her piece that began, “If you really knew me.”

Back on the streets of Kathmandu I’m riding rickshaws, getting out to take pictures, walking the rest of the way home, getting swallowed by a crowd of puppets and dancers.

And this in one day.

Do I sound just a little into this? Can you imagine the sound of me dragging a suitcase out of the attic right now? Truly, the season for traveling is upon us. I’m off to Whidbey Island for a luscious lyric essay writing workshop in the forest, then to Nepal for 10 days of meditation and writing, and back to Mexico in the new year. I go to these places because of roosters in the morning and the rag man rolling down the street before dawn, because of forests, and flying down trails with my arms spread wide, because you might not know what you’re about to eat until you ask, because of strangers with sparkling eyes, because of turning a corner and getting caught up in a parade of 20-foot tall puppets, because these moments change me.

I’d love you to join me in any one of my adventures.

Can’t travel? Want to create your own writing experience from the comfort of your own home? Try my very beautiful 27 Wilder Days – one short video a day for 27 days where I talk about an aspect of Wild Writing, give you a juicy writing prompt and send you on your way. It’s self paced, you won’t have to stand in airport security or check a bag and you can stretch your legs, take the whole seat!