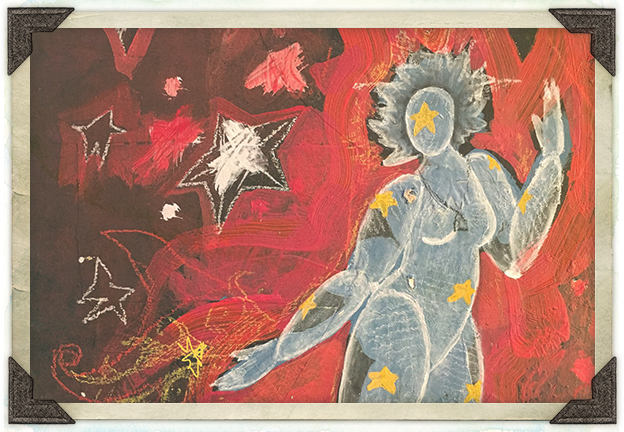 A few weeks ago I read that if I got up before sunrise on the following Tuesday morning I’d be able to see Venus snuggling up close to Jupiter in the sky. Two bright orbs winking at each other – something that hadn’t happened in a long time and wouldn’t happen again anytime soon.

It sounded magical – two massive, bright celestial ships passing in the night – and I wondered if I were the kind of person – if I had enough of whatever it would take to get myself up and outside before the sun rose.

In the past, I’d left those kinds of jobs to my ex-husband, who cajoled me many times over our nearly 30 years together, to get up and out of a tent to see a sunrise or some other display of natural wonder. Once on a sand dune in Death Valley we had a wrestling contest where the winner would get whatever they wanted. And because Mark won, I had to run behind him down the steep slopes of a dormant volcano in the park. He told me that he’d spent two nights there once, sleeping on the floor of the volcano. He talked about the peace of the place, what it was like to be that deep into the earth. When we pulled up to the volcano the wind was howling and spitting sand in our faces. We sat in his old Toyota and watched Japanese tourists chase their hats in the wind. We laughed as they huddled behind skinny trees in the hopes of being protected. He said “let’s go,” and I said no way was I leaving the car in the wind, but because he’d won, he took my hand and began pulling me down into the thing.

That’s often what it took, someone to pull me down into the thing. If left to my own devices, I seek comfort over adventure and can be lazy. I’ll spend weekend days and nights at home alone and not even consider that there is anywhere else to be.

Of course the bottom of the volcano was stunning – a still and silent world in the heart of the earth.

Even my 19-year-old daughter, Zoe, had to promise me hot coffee if I’d get up before dawn and climb one of the jumbo rocks in Joshua Tree last spring to watch the desert turn from dark to light.  And because time with my grown girls is so precious, and because I try to say yes to everything they ask me to do – much different than when they were little and I’d barricade myself behind my office door just to be alone – I said yes, and we climbed those rocks before sunrise, and with blankets around our shoulders, and the promised coffee, we watched the desert turn from inky black blue to pinky orange.

It was one of the best moments I’ve ever had in my life.  The sweet peace of the morning – the stars – the moon still out –huddling next to my child on a rock. I promised her that I would make a plan to wake up on the desert floor at this time every year for the rest of my life.

Recently I left a relationship with a lovely man who told me “there’s so much to do together,” which I found exciting and jarring. He rode motorcycles, loved to garden and work with his hands. Together we’d made plans to get out into my garden and transform the place. His own garden was an eclectic array of vegetables and hummingbird feeders, found metal sculptures, flowers and bamboo.

When I left the relationship I knew I was also leaving our plans for my garden, motorcycle rides and walks out into the night where we’d stop under street lights just to watch the light play in the trees. I told myself that if I tried, that I could do these things on my own.

I wanted to see Jupiter and Venus winking as they passed one another in the sky, but a part of me didn’t care. It was nothing, it wouldn’t matter to my life if I saw them or not. They weren’t as important as staying in the warmth of my bed a little longer, or my shower and my coffee and whatever was next on my list. And then, of all things, I woke up before the light and the next thing I knew, I was putting a sweater over my polka dot nightie, and slipping into flip flops and walking out my front door.

My street – the one I’ve lived on for 23-years – was deserted, not even a lone dog. I looked up into the sky and into the face of the moon. The sky was moving from dark to light and everything was silent. I looked and I looked, but I didn’t see those stars.

It didn’t matter. I was out there. I was alive in the world, up before dawn. I was looking for them.

If you’re looking to keep your writing practice going over the holidays, check out my self guided, 27 Day Wild Writing Video series, which is like me coming to your house every day to write with you. Easy peasy.