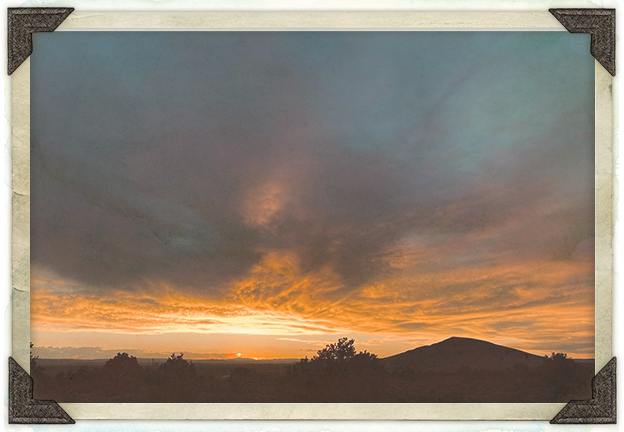 “Life in the liminal state asks us to carry a heavier mental load,” Dhruv Khullar, from an article in The New Yorker, August 22, 2021.

That’s what my friend Nan said to me the other day. “We’re inventing new weather,” she said, as she made her way from Idaho to Salt Lake City through a canyon of thick smoke from a nearby fire, mixed with heavy rain – a kind of weather she’d never seen before, and which made visibility nearly impossible. “I’m afraid,” she repeated to herself as she drove, “I’m afraid,” she said aloud, naming it, and grounding herself to the road.

The skies here in Northern California sit under a smoke dome from neighboring fires. Your sore throat is a reminder that the fire that took out the town of Greenville is still burning. And all the people, and their homes – something you read about, but don’t know how to respond to. The way residents told reporters, “It’s gone, the whole town is gone.” And how you try to take that in before you turn the page.

The sun these past few days is a kind of orange I’ve rarely seen. A beautiful orange, actually. Brighter than the orangiest egg yolk, stunning, really. Yet, even as I want to admire it, there’s something not right about the muddied pall it casts over everything as it attempts to rise over the city.

“We’re in the thick of the fucking it,” Nan said – which is strong language for a woman who prays.

Images of people running after planes at the Kabul airport. 834 people crammed into the body of a plane meant for 134 people. The story of a toddler trampled. Another baby, in diapers being lifted over a barbed wire fence into the waiting arms of a U.S. serviceman.

But I feel it. That part is true. And I’m also pouring another cup of coffee, and checking the time to make sure I can get to the tennis court to meet my friend, and maybe I’ll stop at the market for more half and half.

That too. The mundane world of completely unimportant and distracting things. The projects and plans, alongside the images of families making their way through the streets of Kabul with their suitcases in tow, and doctors in Florida walking off the job because they’re so angry that people who aren’t vaccinated are taking up their ICU beds.

It’s a wonder more of us aren’t falling to our knees from the weight of it, the heartbreak of it, really, if you allow any of it in, if you allow it to touch you.

All these Simultaneous Disasters are Messing with our Brains, from The Atlantic

And the other day, sitting in my car by the lake, I heard the reporter say that the Taliban had taken over the Kabul airport, and this news shot through my body like an arrow – something I actually felt come inside of me. “Oooh!” I said aloud. And even though I can’t tell you where Kabul is on a map, what I realized was that even if we’re not entirely focused on what’s going on in the world – Afghanistan, Covid, water shortages, fires, hurricanes – we’re still carrying it. Just the way our bodies are full of plastic, even though we don’t sit down to a meal of it.

It’s “In the field,” my writing mentor, Deena Metzger says. Which is her way of trying to get us to recognize things outside of our own story. Things that are happening around us; climate change, and its effect on the animals and the planet – for instance.

It’s in the field.

For years I heard Deena’s concerns about the planet, and the way she asked us to wake up to all of that, to bring it into our writing, to include it because it was vital – the most important thing, but none of it felt real to me. Totally conceptual. I believed her, but I didn’t feel it.

But Covid seemed to pull the veil away from everything, and the membrane that separated us from things, and that enabled us to change the channel when the story got too violent or too discouraging has thinned. And I, and maybe you too – started to see the way things really were. Things that weren’t sustainable like the land, the climate, the water, the wars, certain relationships, and even the monarchy seemed to show their real wear, giving way to a shocking nakedness, and for me, an inability to change the channel, and even still, an inability to know how to respond except with heartbreak.

Meanwhile, I am making plans. I am meeting my deadlines and getting on planes, and I’m wondering what this fine white fuzz all over my garden is – something I’ve never seen in 26 years of living here. I’m also not sure how to lead my class in the morning, whether to reference this world or pretend that we can write stories that don’t include the bright orange sun and images of women in burkas running for their lives.

I didn’t know where Wuhan was on the map in March of 2020. It seemed far away, someone else’s disaster. But this New Weather has connected us. We’re carrying more than the virus – we’re carrying each other.