Maybe You’ll Teach Me How to Love 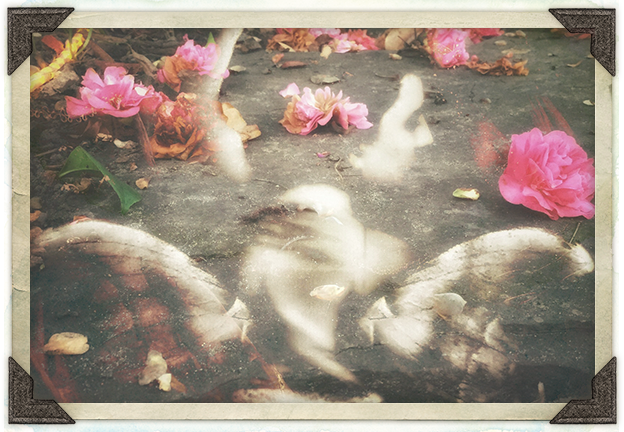 “Maybe you’ll teach me how to love.” That’s what he said to me as we lay in the sparse grass by the creek near his cabin.

I didn’t know about that, though I did suspect that I was going to need to teach him about the conjunction of your – as in, your purse – and you’re, as in, you’re going home. I didn’t even know if it was called a conjunction. I don’t know what a conjunction is because I never took a serious English class – but he was screwing it up, was all I knew. *

That week I had met two Jeff’s on Tinder, both 54-years-old. He was Jeff from Bakersfield. Jeff from Vallejo and I had joked that when people messed up the conjunctions it was an automatic swipe left. We just couldn’t abide by it. I guess I’d made an exception for Jeff from Bakersfield, whose real name was John, but who was changing it to Jeff. I may never get the story of the name change because I may not get to know the man, but it was worth noting. And let’s cut him some slack because his parents were practically teenagers when they had him back in Bakersfield. Then his mother went AWOL and left him early with his father, and within the last year he’d buried that man who’d spent most of his life drunk. If Jeff from Bakersfield wants to change his god given name, let him.

Maybe you’ll teach me how to love. It surprised me that he said that because this man is a leader in the men’s movement, and runs workshops all over the world. He’s done the deep inner work, he’s done the shadow work. On Facebook you can see pictures of him and this sexy brunette loving it up. “She didn’t really see me,” was all he would say about her when I asked.

I’d met him earlier in the day at the intersection of Hwy 5 and Hwy 99 – a barren stretch of California highway that you take when you’re after speed, not beauty. We met at a gas station, drove for a bit, then I parked my car in an abandoned field a few miles away. I left my computer and all my crap inside, and hoisted myself into his dirty truck to take the ride to his ranch – a little house once owned by his uncle, then his father – in the middle of acres and acres of green fields dotted with cows and deer, deep in the belly of the Tehachapi mountains.

He reminded me of my ex, Mark Wagner. The dirty truck with the sage bundles, the tsachkies hanging from the rear view mirror, crap in the back – blankets – buckets. As we drove, me sitting shot gun over rutted roads that dipped and turned into the valley, the truck bouncing up and down on account of the pot holes and the rocks – no road signs, no lights, no way home if I had to get out of there –  I realized, and then I said out loud, “shit, I’m driving into the middle of nowhere with a man I just met at a gas station.”

He wasn’t a total stranger. After we’d met on Tinder a few weeks earlier, he’d called me a number of times. We’d exchanged texts and emails. I’d seen him on Facebook and we even had a few people in common, but still. I’d left my car miles away with my computer inside of it, which might has well have been my whole life.

I wasn’t that surprised at myself. This was the kind of thing I used to do all the time; meeting up with new people, taking them in, getting to the heart of things pretty quickly. It’s this funny faith I have in people, in myself. It’s a desire to connect.

The week before, on an afternoon date with Jeff from Vallejo, my ex had told me to meet Jeff at a café, to not invite him to my house because “then he’ll see where you live,” he said, “and that you have good stuff, and he’ll want to be with you.”

Dating is a crap shoot. Two Jeff’s in one week. One was raised by children, the other had a child of 10.

Jeff from Bakersfield and I had lunch outside of his little house at a picnic table. He brought a blanket for my legs and we talked. I thought he was beautiful, if not a little rough. Long blond hair, 6 feet tall, long, skinny legs and boots. A mountain man – a man who lived alone out here in thousands of acres of green land – no one for miles. He had a painting easel set up in his studio, one inside wall of the house was made entirely of tree bark, his mandolin and guitar were propped in the corner.

He’d left his tribe in Santa Barbara, where he’d lived for the past 26 years and was now living a fairly monastic life in the middle of all this green. He told me he was lonely. Both Jeff’s told me they were lonely, and so was I, though I rarely said it out loud. I rarely said it out loud because I stayed busy, because I never gave myself enough down time to feel those feelings, because I was too good to feel lonely. Lonely was for losers, not for bright lights like me. But as we walked to the creek, I realized that all I wanted to do was hold his hand, though wondered if I reached for it whether it would confuse him since I’d told him at lunch that I wasn’t getting sexual with men until I was actually moving into a relationship with them.

I thought I saw him twitch when I said that, but I’m not sure. I told him that I’d recently realized that sex with men triggered such deep longing in me that I could hardly bear it. And then it would almost always get mistakingly projected onto them – like I was longing for them – when I was probably longing for something much deeper – even something only I could meet. It was confusing. I’d get myself into relationships I didn’t belong in, or pine for men who weren’t right for me. Being sexual was a way to connect, but blurred the lines as to whether I actually had a connection with a person.

“I’m trying to be kinder to myself,” I told him.

At the creek we lay down in the sun – we talked a little, but mostly lay there, and I tell you – I loved that. What I loved was that two people who had been living their lives completely separate from one another for over 50 years could meet on a dating app, rendezvous where two highways come together, and could now lay side by side in the sun, by a creek in the middle of the Tehachapi mountains, and that they’d allowed themselves to rest together. I wish I could say that better – but sometimes I just trust that – and I love that – the bravery of people to lay down, not even touching, by a creek and just be quiet.

That’s when I asked if I could hold his hand. That’s all I wanted, really, just the warmth of another hand – the rough, calloused, warm hand of a man. I didn’t care about conjunctions. I didn’t care that I had a four and a half hour drive back to my home in the Bay Area, and that I didn’t even know where I was or how I would get back. I just wanted to hold his hand by the creek, in the sun, on our backs on a Monday.

“Maybe you’ll teach me how to love,” was what he said.

* My smart friend Kirsten tells me that it’s not a conjunction. It’s a contraction. Though to be fair to my instincts, a conjunction is a part of speech that connects words and phrases, and which I’m always aiming for – connection of some kind.

**Sometimes people ask me how to write about real people who might read about themselves. The answer here is that I let both Jeff’s read the piece so I could get their thumbs up. I also changed their names. Anytime I write about my ex or my kids – same thing – ask first. Though when I write about my mother, especially if I’m making fun of her, I like to surprise her when the blog comes out and she loves that.

Does reading personal writing like this inspire you to want to write your own stories?

Maybe you’d like to join us for our 5-week shortie pie Wild Writing session starting the last week in May and running through June. It’ll be my last class series until September, and a great way to find out if Wild Writing is for you.