Hang in there baby … 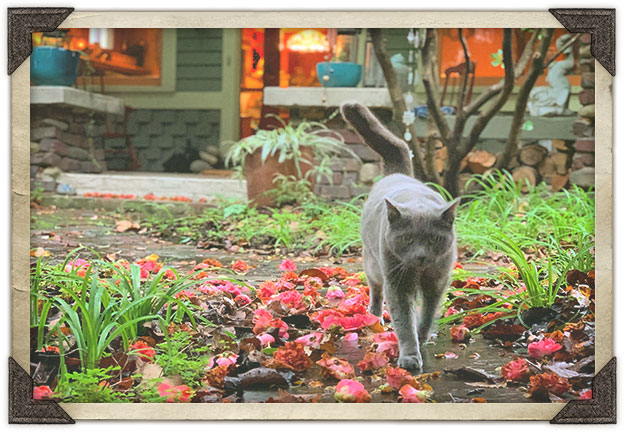 Anyone who knows me will tell you that I’m not an animal person. Seriously, I only just learned that the cat I’ve been living with for the last 8 years is a male. And once, after I’d moved out of my parent’s home in L.A. and had been living on my own for years, I stood at the end of their street cupping my hands to my mouth and calling for our dog, “Bow Wowwww, Bow Wowwww,” I cried, only to realize mid cry that Bow Wow had died years before, and that Mom and Dad’s new dog was named Skippy. I still don’t know the names of my Mother’s dogs – those two furry yappers who are always so happy to see me when I visit. “Hello!” I will say meaningfully to match their joy, but honestly, I have no idea who they are.

So it didn’t faze me last Saturday morning when I walked into my yard and there was a very loud MEOW! MEOW! MEOW! coming from somewhere on my property. Even I could tell that there was a cat out there in distress. I looked up into the trees and over at the roof of my studio to see where the sound was coming from, but I couldn’t see anything, so I walked back into the house to tend to the pressing matter of coffee.

A little while later I went outside again and there was the crying, but louder, more insistent. I noticed my two neighbors, Todd and Kenoa, standing in the street looking up, hands on their hips.

“You’re welcome to come into my yard to take a closer look,” I said. So the two men stepped behind the pink and purple impatiens bush and looked up. “Oh, there it is,” Kenoa said, “see?” as he pointed way up high into the spindly Eugenia tree. I squinted my eyes, and there it was, maybe 30 feet up, some orange and white cat looking down at us. “How the hell?” said Todd, as he looked up, his hand shielding his eyes from the morning sun. “How the hell did that cat get all the way up that tree?”

How the hell, was right. The trees were tall, skinny poles with barely a branch to climb. Maybe the cat was chased up there by a raccoon or a possum, was all we could think.

None of us recognized the cat from the neighborhood, but Todd and Kenoa seemed very concerned, which was generous, I thought. It was Saturday after all, surely we all had better things to do than deal with someone else’s cat. I went back into the house to get some work done, but a little while later I looked out the window and saw that the men had brought a big ladder into my yard, and Kenoa had climbed up and rigged a little blue blanket half way up the tree thinking that maybe the cat would jump down into it like some Cirque Du Soleil trapeze act. But the cat just cried even harder and the men went home. Later I’d see them back in my yard, but this time with re-enforcement. The cat was becoming a thing. I met Kenoa’s sister, and Todd’s daughter, a two-year-old who I chatted up. “Let’s make a wish,” I said to the brown-eyed child, “Let’s wish that this cat comes down from the tree, okay?” She stuck her finger in her mouth and narrowed her eyes at me. “Wishes come true, you know” I added, like I was someone who knew something about wishes, when the truth is I’ve wished for very little in my life – mostly because it never occurs to me, believing that I need to do everything myself.

I went back into my house, but every time I stepped out into the yard for the next few hours, I was met by that MEOWWWWWWING! The cries becoming more and more faint. Night was coming and I wondered whether I’d find a dead cat the next morning – that there might be a moment during the night when it eased up on its vigilance, closed an eye and fell out of the tree.

The next morning, I tip toed out into the yard and crept behind the impatiens bush hoping not to see a pile of still fur.  Then the crying began again and I was both relieved and distressed. The cat had been up there at least 24 hours.

I called the fire department, who came by with their big truck and ladder, but said they couldn’t help because of the low hanging wires on my short, dead end street.

Todd must have put out an APB out on the island email chain, because a little while later, when I looked out my window, my yard was full of strangers, neighbors, and animal lovers who’d come from all over the island to weigh in on that cat. They swept into my yard with ladders, buckets and ropes, each hoping to find a solution to getting that cat out of the tree.  At one point I counted 15 people in my yard. Somebody’s grandfather sat on the stairs to my studio fiddling with his smart phone, two little kids chased each other up and down my brick path, and a woman with a back pack that doubled as a cat carrier came by and climbed up the big ladder.

“Do you have some cat food?” she asked me before she started climbing.

Someone managed to find the cat’s owners, but they were on vacation. We did learn that the cat’s name was Granger, and someone had the brilliant idea to tape the owners voice chanting, “Granger, Granger, come on down out of that tree, baby,” which the woman with the kitty back pack held up high on the ladder so Granger could hear.

“The cat went nuts when he heard his owner’s voice,” some stranger told me.

I was back inside most of the day. I had an event later at the house, but I did occasionally look up to see people I’d never seen in my life standing around my yard looking up.

“There’s a cat stuck in your tree,” one young woman said when I popped my head out the door.

“I’ve never seen a cat that couldn’t get out of a tree,” the fireman had said earlier in the day, and I wondered about the power of animal nature and what would inspire that cat to conquer its fear and come on down. But I was just as curious about the people streaming into my yard, and the ones gathering in the street, tilting their heads up high to catch sight of the cat, who had now climbed even higher into the tree. I was touched that so many people who didn’t know the cat would abandon their weekend plans to come by and try to help.

“We’re animal lovers,” one woman said, when I asked her why she was there.

Besides Skippy and Bow Wow, our family had lots of other dogs and cats over the years, and I thought of us as animal lovers too. But then I remembered a family dog we had as a child who had died, and I guess my parent’s had him cremated, but when the box of ashes was sent to our house, someone misplaced the box and we never found it. For years we had a running joke in our family that “we lose them when they’re alive and we lose them when they’re dead!” which we all thought was very funny.

I could tell that the people in my yard were different than us. They cared about that cat who they had never seen and would probably never see again, and that touched something in me. Throughout the weekend I noticed that my own cat, whose name is Gray, spent most of his time on the porch looking up at the tree, and even though I was doing very little to help except going out into the yard every now and again, being friendly and offering cat food when asked, I wondered if Gray was working his animal magic, sending courageous vibes to Granger, inspiring him to “hang in there, baby,” just like that poster from the 70’s of that cat hanging by a limb read.

You’ll be happy to know that at the end of the day – 35-hours after Granger had gotten stuck in that tree – Kenoa’s sister figured out how to haul a basket up there, close enough to the cat that he eventually jumped in. Whether it was his animal nature that eventually kicked in, pure hunger or even the wise vibes of Gray pulling for him – we’ll never know.

Come on Gray,” I said to my own feline friend as the group carried the relieved looking cat out my gate, “Come on boy, let’s go home.”

Would you like to jump into a super easy, pretty damn deep 27-day writing practice that you can do from the comfort of your own home?  27 Wilder Days is my 27 day writing program that makes it easy to get a lot of ink on the page and can be done in as little as 20 minutes a day. Check it out here.