Instead of trying to make sense of everything … 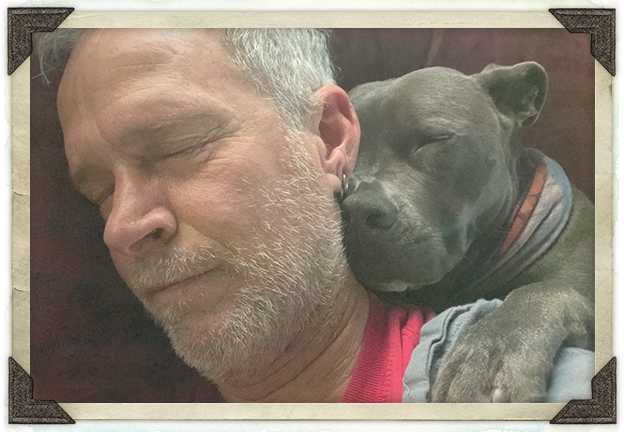 Instead of trying to make sense of everything, I want to say…

That there’s a fine yellow filament falling from the trees in my yard. I’ve been on this property for 27 years and it only started happening a few years ago. The trees are telling us something.

And when Mark’s dog, Karma, ran away a week ago, Mark didn’t worry much until two hours passed. She’d been on a leash for the last year and a half because of a couple of surgeries that meant she couldn’t run. Two weeks off the leash and she took off like a teenager who finally got the keys to the car. Mark has been emptied. Karma was his night time spoon, his morning snuggle, his co-pilot sitting shot gun in the truck. His girlfriend. That’s what he called her. Karma was his person.

One psychic told Mark that Karma had been bitten by a scorpion. Another said she was with a good family. One seer said Karma had gone north, another said she’d gone south. One said she saw a barn with a vertical roof and tall windows, and the next day Mark found that very barn, but no Karma. One day Mark covered 600 acres of New Mexican sage brush in the middle of nowhere, calling her name until he was hoarse. He put up flyers, flew a drone over the high desert. The thing that made the most sense to me was the animal tracker who told Mark to hang his dirty socks and underwear on the line so Karma could catch Mark’s scent and follow it home.

It’s easier to show you a picture of Mark scanning the horizon for his dog. Or the way Zoe, our youngest, flew to New Mexico and drove two hours so she could sit huddled with Mark near his wood burning stove, and plot where they would look next.

It’s easier to write about those things than it is to share what Ellen told me when I asked her what my blindspot was.

“You believe that you need to work very hard,” she texted me.

It wasn’t the first time someone reflected to me how hard I work, how I could ease up on the perfectionism, not take everything so seriously, consider lowering the bar. But it was the first time I heard the truth in it. I think it was the way Ellen added at the end of the text, “And that makes you sad.”

Maybe that’s what got my attention, because that part was true. I do recognize a sadness, an exhaustion. Not for my work, but for the way I’ve been working for my whole life – a mashup of Taurean intensity meets how good it feels to do things well, and the approval and the love that comes with doing things well, and then a desire to do more things well, and how over time I’ve found myself running to the next thing, and the thing after that, barely looking back.

Instead of trying to make sense of it, I’m remembering something Gary, our old therapist told me years ago when I was having a real breakdown. “I’m falling apart,” I told him. “No,” he said, “the parts you don’t need anymore are falling away from you.”

And I like what Lisa said in Wild Writing the other day, how she wished she could unbutton the top button of her jeans right there in class because her pants felt tight. And so tomorrow in class, I’m going to suggest we all start by unbuttoning that top button – just start with that.

Which won’t bring Karma back. But it does suggest a kind of exhale, and a release for all that we’re carrying. For the mysterious yellow filament falling from the trees, for the forgiveness Mark must give himself for losing Karma. For me, it’s all this efforting that I’ve carried my entire life, and that is no longer sustainable. May I begin to let it go, and into the wind, so I might follow the scent of something more true inside of myself and follow that dog home.