A Cosmic Hive of Humanity 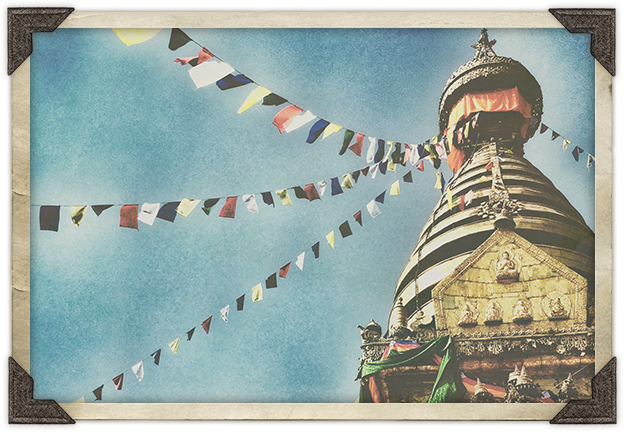 I’m writing this note from Boudhanath, a city inside of Kathmandu, Nepal. I don’t believe in bucket lists – good god, no – but I do hope you to get to this place sometime in your life – the sooner the better. Not that it’s going anywhere; it’s been here since the 13th century and probably longer – but we know where you’re going –  where we’re all going – eventually.

My partner out here, James Hopkins, who runs the Himalayan Writer’s Workshop, has a story about a student who tells his Buddhist teacher that he doesn’t think he has time to take the path to enlightenment. His teacher says, “well, then you may have a scheduling problem.” I took that to mean if you want it – enlightenment, or to visit Nepal, or to let someone know that you love them – you might want to get on that, put it higher on the schedule.

Kathmandu is cracked open brilliance. The entire valley is laid out like a mandala – for real – and there are sacred sites everywhere you turn. Some of them are too mind blowing to comprehend – like the Boudhanath Stupa which I’ve pictured above – and which is also a world heritage site. But some of these ancient, sacred spots are in the middle of congested streets and surrounded by broken buildings, sidewalks that fall into sewers, and monkeys swaying from thick electrical wires covered in soot and which hang low in the cool November breeze. I’ll be honest with you, much of Kathmandu is a chaotic catastrophe of open fires on the street, traffic, and way too many people – most of them smiling.

My dear friend, Jeff Greenwald, who was supposed to co-teach with me, but who couldn’t come at the last minute – tells me that the Nepalese are the sweetest people on the planet. Last night our Wild Writing workshop participants sat in a 10 X 7 concrete bunker belonging to Karma, an Indian woman from a beggar’s camp that James works with. She cooks, sleeps and calls home that dark, doorless box that she shares with her husband and her four children.

To our eyes it’s rough living; no privacy, showers taken from open pipes between the bunkers, mud and dirt everywhere, impossible to keep clean. But as we sat on her floor in a circle, there was community, and the children smiled and crowded us with their sweetness. The women brought us sugary Indian tea, and cookies for James, who runs the Quilts for Kids project that supports the women of the camp in making quilts, which James sells in the states, and which takes their children – who had previously begged on the streets – and puts them into school.

I never understood why Jeff kept coming back to this place over and over for the last 30 years, why he wrote three books that take place here, or why James, a nice boy from rural Virginia and a former Wall Street shark, renounced his swanky life in Malibu to live here for the last 15 years. I mean, the air is so bad that even the Nepalese are wearing face masks these days. But then there’s that crazy mandala we’re sitting on – which is intended to help transform our clunky, ordinary minds into enlightened ones. And that message of generosity and beauty are everywhere.

Every morning for the past three days our group has done a 6:30am walking meditation around the kora – the path around the stupa – with hundreds of other people – most of them locals – Tibetans, Nepalese and Indians who live here. If you would like to listen to the soundtrack that I’ve provided below, you’ll get an earful of what this place sounds like at 6:30 in the morning, but it starts much earlier, at 4am, and goes on like this throughout the day.

As you come in from the street and enter this great swarm of humanity you will be swallowed by a great buzz of chanting and bells. It’s a total cosmic hive. Beggars in rows line the path around the stupa, their arms extended. People are missing limbs, others are dragging themselves around the stupa on their knees and using their hands for mobility. Monks in red robes sit and chant, others circle the stupa doing full body prostrations where they lower their bodies to the ground to release their ignorance, their desire, and their anger, and then come back up in prayer. There are also ordinary people walking with mala beads – maybe on their way to work – who circle the stupa to chant before they begin their day.

As I walk the circle I contemplate my own life far away from here: the people I love, the work I do, and where I am distracted. I think about what I want to release and the form my own ignorance takes. Back home I know so many people who are sick – people my age and younger who have cancer and other life altering illnesses.

I don’t want to waste time making bucket lists, pretending that I have enough time to get to things later. I mean to take seriously my intention to make beautiful things, now. Am I willing to put down my iPhone? Am I willing to cut back on teaching to write those two books I’ve started? And what of the students who will drift away and find other teachers? How will I feel about myself when I’m staring at my own blank page?

And what about love? How high will I allow those banks to flow?

Truly, it’s nearly impossible to capture the complexity of what is going on in this place and how it affects me. Even taking a picture of something here – like the great stupa – doesn’t do it justice. This is my second trip to Nepal, and I may have to come back many more times – just like Jeff – before I even begin to glimpse the tiniest slice of understanding. I’m inclined to try to capture things – to box ideas into tidy packages, to label them and move on. But not here. Not in this mysterious, complicated place, this mass of humanity sitting on top of a mandala.

It’s been a sweet, sweet privilege to bring Wild Writing to the Himalayas. Today in our writing circle, Ravina, a young Indian woman from the beggar’s camp wrote with us. “If you really knew me,” she began, and the rest of us leaned in to listen.

The early bird deadline for the 2019 Wild Writer Teacher Training is coming up fast on December 1. If you’d like to learn how to lead these gorgeous circles of transformation and light, and to change the waters of your community through authentic stories, consider joining me right here.

And if you’d like to learn more about The Quilts for Kids project which takes Indian beggar children off the streets and puts them in schools, check it out here.

Himalayan Writers Workshop. James creates a fabulous 10-day journey for writers all year long. We’d love to have you join us sometime soon.