Claire and the Butterflies 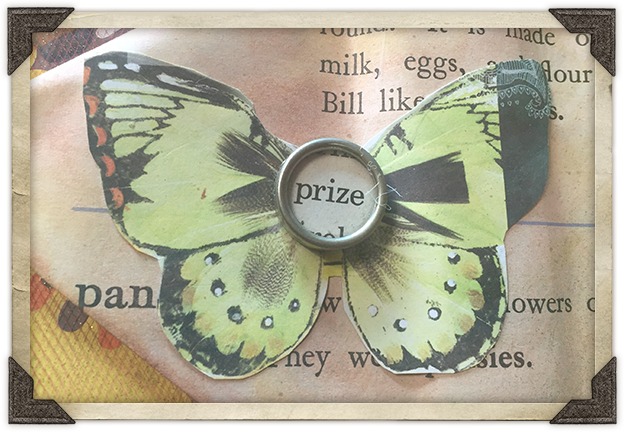 This is not the first time this year that I’ve sat down to write a blog post and not known what to say. I am speechless about the state of the world. I am flattened every time I hear Trump’s voice or watch him point his finger at some mysterious enemy on television. I am incredulous when I see a photo of republican women wearing smart red suits and waving American flags at the president, lips as shiny as blood, each one waiting for a kiss from a man who doesn’t give a rat’s ass about them.

I need a news break. I need to turn my attention to something simple and beautiful. I need to find something good out there so that I’m not huddled inside my house waiting for the SS to knock on my door, or calculating how old my children will be when we run out of water, wondering whether we should have armed those girls with shot guns.

But then I remember the butterflies.

It’s not my story, but my friend Claire’s story, and even as I write this I know I’ll have to get her permission to share it and she might say no because her story is huge and not one that I want to minimize in a blog post. And also because one day she might want to write it herself. I’m just a witness, someone who started Wild Writing with Claire about a year ago, and who got to watch her take on the butterflies.

What you need to know is that three years ago Claire’s husband had a stroke and he’s been in the hospital ever since. He doesn’t move and he doesn’t speak, and he’s on a trach – which means he doesn’t eat or breath on his own –  but he does talk to Claire through blinking, which is fine for yes or no questions, but not so simple when she can tell he’s upset about something, but doesn’t know what that is, and she has to ask a litany of questions to zero in. Like the time she came in and saw that his arm was covered in bruises and figured that someone had handled him roughly, but she couldn’t understand the blinks to figure out who had done it.

Here’s a truth: there is no treatment for her husband’s stroke, so the doctors do nothing because the presumption is that there is not much hope. Here’s another truth: if you’ve been laying in a hospital bed for three years and your progress appears to be invisible to doctors and nurses who aren’t measuring for progress in the first place, then it’s possible you will get ignored.

That’s why Claire is at the hospital every day from 9:30 – 6:30, seven days a week for the last three years. She’s doing the doctoring, clearing her husband’s trach each day, exercising his legs and his arms, reading to him, meditating with him, talking to nurses, making sure he is getting the attention he needs, getting him outside when she can, giving him supplements.

There are 10 stroke victims on the hospital floor, men who don’t speak or move and some of them get occasional visits from family members, but many don’t. Most of them lay there alone. Claire has never left her husband’s side. When he had the stroke three years ago she flew out of her house, left it and her dog and her job behind and has barely been back since.

This is her job now. When a doctor or a nurse asks her husband a question, and says, “give me a thumbs up if you understand me,” and it takes him a whole minute to raise that thumb – the result of three years of work with Claire – it’s possible the nurses won’t see it because a minute is a long time to wait for a thumb to move, and because they have a whole floor of stroke patients to get to. But Claire sees it. She pays attention to the tiniest things.

One day a month ago, Claire sat in her car crying because she was so tired and was at her wits end, so she pulled out her phone, because you know, that’s what we do, and she read that the butterflies were dying, and that if we want to keep them from disappearing, we should plant milkweed. So she went to the nursery and she bought three beautiful milkweed plants, and because she is staying with me, she planted them along the side of my yard.

I watched her that day. I thought to help her, but it’s possible she hadn’t been in a garden for years, and I could tell, as I watched, that there was something satisfying about getting a shovel and pushing it into the earth, putting her shoulder into it, grunting and squatting down to get the plants and place them in the holes. Something satisfying about standing over the plants with a hose – like job well done.

Together we watered those three plants every few days. Sometimes in the morning we’d look out the dining room window and coo at their progress. When we found out that Claire had possibly brought the wrong kind of milkweed, the exotic kind that need a lot of sun, I suggested we move them to a sunnier spot, but our friend Suzanne, the gardener, who heard the story said no, Claire had planted them there and we should tend them there. So we did. We watered them and one day little orange flowers appeared. And then a little while after that the caterpillars came.  Fat caterpillars happily munching the leaves.

Claire tells me that she went for the butterflies because the thought of them disappearing was heartbreaking – another intolerable loss. Helping them was tangible, it was clear and immediate. It was a way to participate in helping the larger world, when hers is so focused on saving just one life.

Claire is a believer, doesn’t doubt the possibility of her husband’s return, but the time horizon is distant – she has no idea when he’ll come back or whether they’ll sit alongside a river again, or throw a ball to their dog. The butterflies are now. They’re an immediate story of transformation – something she could have a hand in. And it’s not lost on her that this transformation from caterpillar to butterfly could be confusing and painful for the caterpillars, which feels so close to home – a feeling she is all too familiar with as she watches her husband consider the possibility of breathing on his own.

Now the leaves are gone because the caterpillars have eaten them, and the plants look skinny and to the common eye they might look like they’re not doing so well, but Suzanne the gardener tells me that there are big things going on under the ground, that there’s a bit of magic at work there, things happening that we cannot see.

Can’t come to a workshop but want to get to know the sound of your own voice? Sign up for 27 Wilder Days… one video a day in your inbox where I share what I know about Wild Writing, give you a writing prompt and send you on your way.